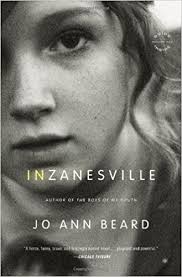 Even if you’ve never been there, you’ve heard enough to know the American Midwest isn’t sexy. I’m hardly the first Midwest native to admit to being from a Regular ‘Ol American Place.

The Midwest is “flyover country”–its detractors call it–between the glittering East Coast and shining West Coast. Yep, no matter how many Northeast Ohio boosters try, most of the U.S. will never be convinced of the beauty that is the “North Coast.” And that’s okay.

It stings–not just because it’s a blanket generalization and untrue of my rolling Ohio hometown. (In fact, it stings more than memories of the same thing being said about my 6th grade chest–and that stung.)

It stings because flat is sameness. And don’t we (even States–if States had egos) want to feel special, unique, memorable: the opposite of same, boring, forgettable?

I am more than a home state booster; I’m a home state narcissist. You see, I picked up Jo Ann Beard’s novel, IN ZANESVILLE (pub. 2011), thinking it was set in Zanesville, Ohio.

It’s not. It’s set in Zanesville, Illinois, which, I sheepishly admit, is pretty much the same. In fact, it’s the sameness, the universality of the experiences of the novel’s fourteen-year-old narrator, that makes this novel so special–and yet relate-able to any reader who is or was ever a girl. And that’s about half the world.

From the jacket copy: Jo Ann Beard shows us that in the seemingly quiet streets of America’s innumerable Zanesvilles is a world of wonders, and that within the souls of the awkward and the overlooked often burns something radiant.

In the same surprising way, the fact that nothing really happens, plot-wise, in this 1970s American story–except the day-to-day growing pains of our unnamed narrator–makes it feel as if everything happens. Page-turner? Not exactly. But I was truly living among these characters while I read.

Our adolescent narrator is nameless, which doesn’t feel like a trick in Beard’s skillful hands. It makes the narrator all the more special. It allow the reader–me–to become her…

Which makes the darker moments of this novel all the more powerful–and personally affecting. My favorite line from the book, the prescient and heartbreaking:

I do miss childhood: one long trance state, broken only by bouts of sickening family discord.

Much of the family discord stems from the narrator’s dad’s alcoholism. Of course, there’s nothing regional–and everything sickeningly universal–about alcoholism. (This strain of Beard’s novel reminded me of Joyce Carol Oates’s THEM, in which alcohol also figures as a character in its own right.)

Here’s where a lesser author than Beard could have gone wrong. But it’s her light touch that makes the narrator’s home life, dictated by an alcoholic father, all the more powerful. Try this on for subtle: The narrator’s dad is out somewhere, drinking, and her mom decides to head to the local tavern to sit with her friends and have one drink, herself. “I”m too tired to do anything else,” she says. From our narrator:

On nights like this, when my dad is missing, she sits with other couples and with her best friend, Kay, a small woman with a gravelly voice and a similarly drunk husband. It’s a mysterious damp cave over there at Tuck’s. No kids are allowed, but they can peer in from the propped-open door during day-light hours and see the dark wood, a glimpse of mirror, and every kind of liquor possible, lined up on shelves behind the bar, like a library, only booze. There are usually one or two people sitting on stools with an ashtray and a glass in front of them. You can order cheese sandwiches there; I’ve had them brought home to me.

Here we feel the narrator peering in on what might be her own womanhood one day but, we pray, not.

Me, I like my womanhood. I’m not terribly nostalgic about my own fourteen-year-old self. For that reason, maybe, I don’t generally gravitate to coming-of-age novels. IN ZANESVILLE, however, is one I plan to come to again and again–for the pleasure in the reading and the lessons from Beard in the writing. I will also be seeking out Beard’s collection of short stories: THE BOYS OF MY YOUTH.

Read more about IN ZANESVILLE in a Rumpus review (warning: spoilers).

What was your favorite novel you read in 2017?

8 thoughts on “Throwback Thursday: Why half the world should read IN ZANESVILLE”