I went for the art of the place: the earthy poetry and fiction borne by writers tied to the ever-evolving American Rust Belt, which has seen its share of glories and struggles, stemming from the rise and fall of mining and heavy industry.

And, I admit, I fretted just a little bit about what to wear. Stay with me…I haven’t gone all fashion blog on you.

No surprise that among the students of creative writing, the authors, editors, publishers, and poets attending the literary conference–there were ensembles of black, a poet skirt or two, and a pair of cat face-festooned flats (for real; they were fabulous shoes).

There was also a Browns cap. Yep, those Browns. The NFL team that went win-less last year (after which the people of Cleveland held a perfect-season parade).

At the sight of that beautiful brown and orange hat at a literary festival, I knew I’d found my people.

It got me to thinking, if you Venn diagram a place (and this is as math-y as I get), how much overlap is there between the place’s art and the place’s sport? Let’s think on that a minute, while I take you with me on another trip.

Earlier this month, as the fall foliage reached its peak color, my family visited the lovely village of Cooperstown, New York.

For its small size, Cooperstown is a place with impressive arts offerings, but it is known far and wide for being the home of the National Baseball Hall of Fame and Museum.

I am a Cleveland native (have I mentioned?), and so I root for the Indians over any other baseball team, but I’m no rabid fan. So, I was prepared to enjoy the museum in the way of family-museum-outing enjoyment. By this I mean: the kids will break nothing and learn something, my husband will be engaged, and there will be snacks (great pizza, actually; thanks, Sal’s!).

It started out as I’d expected. At the Hall and Museum I got my Cleveland on, for sure, with exhibits on everything from the Indians’ historical predecessor teams; to interesting team swag; to Indians players both classic and recent: Jim Thome is the 13th Indian to be inducted into the hall and was part of the 2018 class. 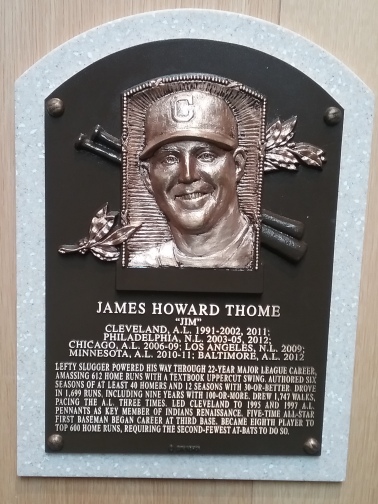 I went for the sport of the place. Little did I know I’d find an art gallery in the National Baseball Hall of Fame and Museum. (Total eclipse of the Venn diagram!) The museum’s impressive art collection includes a Norman Rockwell, of course; an Andy Warhol; and Rossin’s large-scale photographic portrait of Babe Ruth. My favorite piece, however, was one I’d never before viewed. Combining my love of American history with the Rust Belt landscape, and this art-sport meld titled “Mine Baseball” really spoke to me:

“1937. When Mervin Jules first exhibited the painting, Time Magazine praised his use of ‘restrained luminous color.’ According to Jules: ‘I was collecting studies among the bootleg mines in western Pennsylvania and saw a group of miners on a slag field playing baseball late in the day. They cast a long shadow and it all fascinated me.'”

Just a few years later, World War II seemed to galvanize sport’s place in another art form–film–with American movies like The Pride of the Yankees serving up feel-good when the U.S. needed it most. But it might not have been about the game as much as something less tangible. From a wonderful essay by Georgette Gouveia, “When Sport Meets Art”:

For writers and filmmakers, whose works are temporal narratives, sports are often less about the actual athletic endeavors than they are about their metaphoric potential.

As with art, sport gives us a glimpse into the history of a place (it’s past potential, if you will). I was intrigued to learn at the Hall of Fame and Museum about the Cleveland Spiders and the Polish Nationals of Buffalo–early startup teams that banded together young Rust Belt guys (and their fans). In sport, they could discover their potential through a controlled game, when their lives led outside the diamond may have held more struggle–and less control–than any athletic prowess could tame.

Like art, sport can be a communal and soothing balm–for players and audience members. And, so, while you might not expect to see artists waving the sporting flag in shinier American places, sport feels right at home–even, or maybe especially, among artists–in the Rust Belt.

In my interview with Akron, Ohio, memoirist and author David Giffels about his book of essays, titled The Hard Way on Purpose, we talked a lot about sports–by bookish interview standards anyway. And why not? Akron exists comfortably as both the birthplace of the poet Rita Dove and basketball phenom Lebron James.

Art and sport. Must one be high-brow and the other low? Nerds vs. Jocks? And, without getting political here, must art and sport shoulder the burden of political party affiliation?

Tell me, is yours an art or sports town? How do art and sport meld for you–or do they? I want to know.

More reading on the intersection of art and sport:

“The Performance of Writing: What Writers Can Learn From Elite Athletes,” an essay by Claudia Hinz on the Brevity blog.

More to do in Cooperstown, New York (thank you to my wonderful aunt and uncle for graciously hosting my little “team”!) and a few closing pics of the carousel at the Farmers’ Museum:

13 thoughts on “Sport in the Art of Place”